One for the road?

The fast paced worlds of car racing and luxury watches have been linked for decades with the sport – and the cars – providing a constant source of inspiration for many watches, such as the Rolex Daytona, and Tag Heuer Carrera.

Take a look at our pick of Racing watches –

No doubt the most famous of motor racing watches is the Rolex Cosmograph Daytona. Marketed with the tag line ‘The Drivers Watch’, the Daytona takes its name, of course, from the world famous racetrack.  Rolex introduced it to the world in 1963 as the the watch for those with a passion for driving and speed. It’s become an icon joined to the world of motor racing and continues to be created to this day. The fiftieth anniversary platinum model, shown here, was introduced at Basel in 2013. 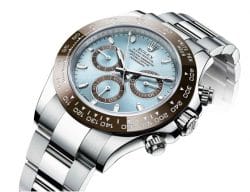 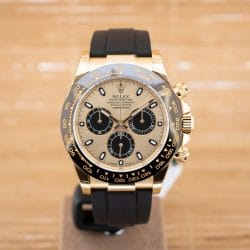 Chopard Super fast chrono, 45mm with tachometer scale inscribed around the rim, has silver brushed lines against a black dial that are said to represent the cooling fins on a racing engine. The rubber strap with its choice of smooth tread/textured tread pattern is made to resemble the slick trees used on high speed tracks. 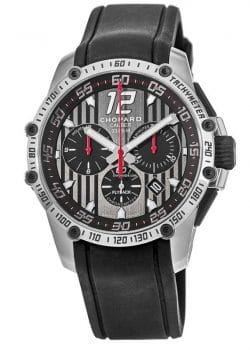 IWC Ingenieur Double Chronograph Titanium. Iwc revamped the Ingenieuer line when inspired by the partnership they have with the Mercede AMG formula One racing team.  Showcased with this particular model – all titanium case and bezel with the titanium crown protector and push buttons are coated with black rubber for better grip. The chronograph can record two immediate spilt second times within a minute. The user can easily record lap times with this feature. The 45-mm case of the Ingenieur Double Chronograph Titanium is water-resistant to over 120 meters and features a screw-down crown; it comes on a rubber strap, both cool and lightweight, and is available with either a silver-plated or black dial. 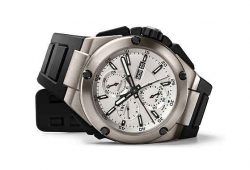 Omega Speedmaster Racing Co-Axial Chronograph.  Omega say they have modernised the Speedmaster Racing whistle not losing any of the iconic values of the lunar versions. Featuring a red dial with a date window, and three smaller sub-dails, that are black with a subtle pattern. Anti-reflective glare to both side of the sapphire crystal and water resistant to 100 metres. Self winding with a power reserve of 52 hours. 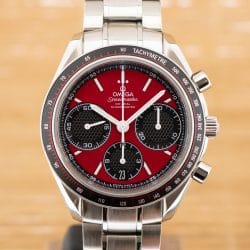 TAG Heuer became the official timekeeper of the Grand Prix in Monaco, the most glamorous event in the Formula One racing calendar. And Tag celebrated the 50th anniversary of the Carrera racing watch and created several new Tag Heuer Carrera watches. The design of the flyback version, shown here, is influences by the vintage stopwatch design, with seconds displayed along the outer rim of the dial. 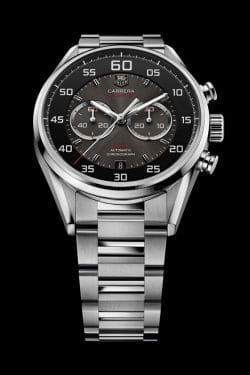 Tag Heuer Monaco Calibre. In 1969, the TAG Heuer Monaco and its square case, equipped with the first in the world automatic chronograph, became super famous not just by being a top luxury watch but also by being in the Le Mans movie on the wrist of Steve McQueen, as he drove his Porsche 917 bearing the Gulf colours of blue and orange.

This modern special edition took those emblematic blue and orange racing colours and featured them as stripes on the iconic square face. The gulf logo forms part of the design along with two sub-dials and date display at six o’clock. The leather strap has bright orange stitching reminiscent of the car seat stitching. 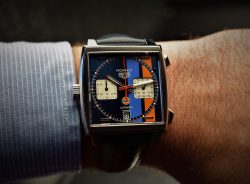 Watch Buyers have one of these in stock; 39mm stainless steel and leather from April 2019. Shown below and available here. 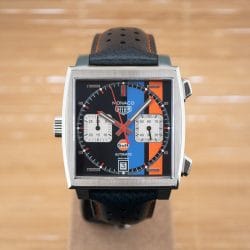